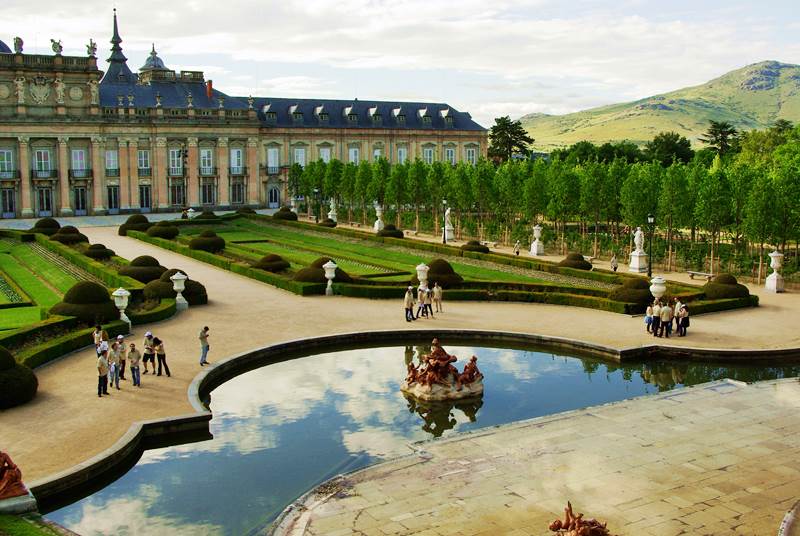 IF YOU'RE INTERESTED IN | Architecture | Classical Art | Gardens | History |

Do you want to know how it feels to be a Spanish 18th century king during his summer holidays? Try our private guided tour of La Granja.

When French-born Spanish king Felipe V (Philip V) launched the construction of the Royal Site of La Granja de San Ildefonso in 1721, he undoubtedly had in mind Versailles, where he was born. That model had probably more influence in the gardens than in the palace itself. Based at the foot of the Guadarrama Mountains, the whole Royal Site received water abundant enough as to feed the monumental fountains and artificial cascades between different terraces. French gardeners and sculptors created both fountains and terraces. Meanwhile, the palace’s first core followed a Spanish classical design by Ardemans, until Procaccini, Subissati and Juvarra transformed it into a rather Italian palazzo.

Its late Baroque interiors were accordingly decorated by an Italian team with frescoes, stuccos and marble floors.

Besides its architecture (garden and palace), La Granja is also remembered for having displayed a true sculpture museum, both Ancient and 18th century, from the collection of Philip V and Queen Isabel de Farnesio.

Their son Charles III added another dimension to La Granja de San Ildefonso, close to the pragmatic intention so typical of the second half of 18th century: a rationalized new urban layout for the town around the Palace, and the Royal Glass Factory.

All these elements justify a private tour to the most coherent of the Royal Sites around Madrid: a pure 18th century creation.

If you wish private tour guide to visit La Granja, fill the form and we will contact you. We recommend a three hours tour.